GARNETS in my Boots!

Garnets are relatively common in many places in the US. A good place to start a search for gem-quality garnets is by looking at local rockhound books and mineral and rock books in your area. These often give information on where to hunt for this gem. One way to find your own gemstone deposit, as most are overlooked by geologists (geologists are not trained to recognize gemstones in college courses, believe it or not), is to search geological maps of Precambrian terrains. The Precambrian is basically the very old rocks that form the basement for younger rocks that were later deposited on these ancient rocks. The Precambrian is designated to include rocks that are typically older than about 600 million years and may be separated into what geologists call the Proterozoic and the Archean. Don't worry too much about these designations as both may have some garnets. And the best places to find geological maps are your local state geological surveys, the US geological survey and also thesis maps in a university geology library.
﻿

The reason why these areas are good for hunting garnets is because these old rocks were abused by Mother Nature through geological time when placed under great pressures and temperatures causing the rocks to recrystallize. The pressures and temperatures were often favorable to crystallize garnet if the original rock had considerable aluminum. Aluminum is important as aluminum and silica are primary constituents of garent and both metals show up in mica. So look at geological maps and search for mica schists and vermiculites when looking for garnets and think of mica as an possible indicator mineral for garnet. But just because you have mica, does not mean you will have garnet, but you you chances of finding garnet will increase dramatically. There will be some other rocks that contain garnets, and these are often good places to look. If you are lucky, the geologist who put together the map you are looking at may have called a schist something like "garnet-muscovite schist", etc.

Next, learn to recognize garnet in the rock as well as in the adjacent creek beds. A good, basic mineralogy book may be helpful in this regard. Now get out and look for garnets. Those that are transparent to translucent with few fractures can often be faceted. Garnets that are ugly, usually are industrial garnet. But some opaque garnet can be cut into cabs and still make some interesting jewelry.

To get the garnet out of the hard rock may be a challenge: sometimes it is worthwhile to pan adjacent drainages for garnets that have already been weathered out of the outcrop. While you are looking for garnet, if you do stumble upon a vermiculite schist, look closely for garnet and even for ruby. In the outcrop, they may look similar, but they do have different crystal habits. Garnets are normally equal dimensional, whereas ruby and sapphire form prisms (elongated in one direction).

The second ruby and sapphire deposit I discovered, was actually discovered in the basement of the Wyoming Geological Survey building. Another geologist had picked up a boulder of vermiculite schist thinking that it was filled with garnet. When I looked at the sample, it was obvious he had misidentified the rubies. I then went to the site where the rock had been picked up and found many hundreds of rubies, pink and white sapphires and industrial corundum in the outcrop along with gem-quality kyanite withing 100 yards of the site and also picked up some of the highest quality iolite ever found in the US. On later excursions to this outcrop, I found the largest gem-quality iolite in the world at that time (later I found much larger iolite gemstones).

Some people have a difficult time figuring out how to find gemstones and where to find them. It doesn't matter how much education or experience one has, anyone can easily mis-identify gemstones. It is important not to jump to conclusions and to focus on the physical aspects available. There are many prospectors and rock hounds I've dealt with over the years who see what they want to see and not what is really present and many tend to focus only on color. My recommendation would be to look at the shape of the mineral, any fractures, its hardness and what kind of rock one has before jumping to conclusions. In the final analysis, one may have to visit a State Geological Survey and request examination by a mineralogist or x-ray technician.

Garnet, a relatively common mineral in the continental crust, is most often found in metasedimentary rocks known to geologists as metapelit... 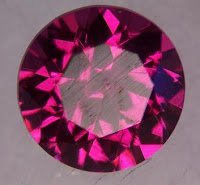